Bright lights, big city - New York has claimed itself as the birthplace of the cocktail. With 4th of July happening this weekend, we delve into the surprising history and origin of the mixed drink

Whether it's shaken, stirred or dirty, New Yorkers love a cocktail.

The concrete jungle will be buzzing with Independence Day celebrations on Saturday and we have absolutely no doubt that cocktails will be making a prominent appearance. Afterall, wasn't the cocktail born in New York City?

While the exact origins of the cocktail are hazy, the Brits are said to have started mixing drinks during the 18th century in the form of sweetened gin. Of course, the Americans eventually followed suit, creating drinks of greater quality and with a hint of sophistication.

However the term 'cocktail' didn't appear on paper until 1798. A London newspaper published a satirical, fictitious piece detailing the bar tabs of key political figures - "cock-tail (vulgarly called ginger)" was one of them.

Five years later, an American publication called the Farmer's Cabinet wrote a spoof editorial of a hungover 'lounger' who "...Drank a glass of cocktail - excellent for the head... drank another glass of cocktail."

The definition of a cocktail came into fruition in 1896 when a New York-based newspaper defined it as a "stimulating liquor, composed of spirits of any kind, sugar, water and bitters."

So even if cocktails weren't technically born in New York, the city's dedication to cocktail culture is enough to warrant a Manhattan on Saturday afternoon. Check out our recipe below. 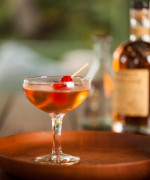