With five eye-opening beers added to the range, the crew behind Tuatara Brewery give us the lowdown on the new brews on the block – and it seems the hazier the better

Tuatara Brewery kicked off last year with the launch of five new beers, simplifying its beer brand names and introducing a striking new packaging design, showcasing the same tuatara eye that has long been an icon for the Kapiti-based craft brewery – most recognisably on its bottle cap.

The new Hazy IPA is a refined recipe based on last year’s release and keg-only favourites Suspense and Kilmog Fog. The Hazy Pale Ale has all the big flavour and aroma you should expect from this style, but with a lower ABV.

Known by a multitude of names – Hazy, Juicy, New England, East Coast, after its US birth right –and for its distinctive cloudy appearance, there’s no doubt this variant is becoming popular, with beer buffs worldwide enjoying its big juicy flavours and scarce bitterness.

A relatively youthful ale, the story of how the hazy evolved has become something of brewing folklore. Flattened by Hurricane Irene in 2011, an Eastside brewery was forced to employ some non-traditional methods to keep the locals appeased. Methods that quite unintentionally created its highly prized characteristics. In just a few short years breweries worldwide have been brewing the ‘East Coast IPA’, no mean feat in a country famous for its well-established piney, bitter West Coast version.

Often described as the ‘IPA for people who hate IPA’s, such a style provided a great opportunity for the Kapiti Craft Brewers. “IPAs and Pale Ales are still leading the charge in New Zealand, but we already had some solid hoppy IPAs with other new additions Primeval Tendency (New Zealand IPA) and the IPA,” said a Tuatara representative. “So we wanted something that would provide craft drinkers an interesting alternative, or for those experimental drinkers giving craft a go, an IPA with less bitterness that didn’t compromise on the big fruity flavours.” 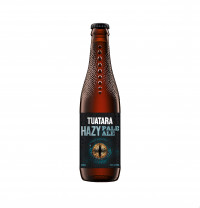